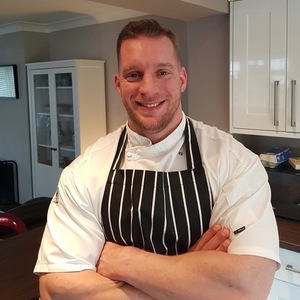 Stephen is an experienced and passionate chef with over 18 years in fine dining Michelin and Rosette restaurants and hotels in England.

Starting his career as an apprentice chef at the age of 15 Stephen quickly passed his NVQ’s in cookery. Finding his passion for every section in the kitchen, Stephen took easily to advanced butchery, fishmonger, pastry, bread making and baking, creating sauces, soups and stocks, making Stephen a well-rounded chef, capable and confident to undertake any job in any kitchen to an extremely high standard.

Stephen has been classically French trained throughout his career but has also studied a lot of regional Italian food, practices and techniques which he also incorporates into his food.

Although Stephen has a passion for all things food he is especially passionate about the produce, food style and heritage of British food.
Supporting the growth of organic, local and ethically sourced suppliers is very important to him, Stephen believes in the quality of produce he uses in his dishes.

During Stephen’s career as a fine dining chef he has written many bespoke menu’s for celebrities and VIP’s for all types of occasions and budgets, from Canapé menus and bowl food to sit down 7 course dinners for weddings, birthdays, anniversaries, and other celebration events